In this tutorial, we are going to be creating a simple Rock Paper Scissors game with Python. For those who are new to Python or have some prior experience, this project is a great first game or a fun review.

Who is this Project For?

This is a beginner level project for those who are new to Python. At this point, you should already know the basics of variable assignment, if-statements, and while loops. You should also have some previous experience with operators and booleans. These are the concepts that you will use and build from as you code this project.

What Will We Learn?

This project focuses on using booleans and operators, as well as using while loops and

if-statements to control the program’s output. For example, if the player chooses rock and the computer chooses scissors, the player will win. These concepts allow us to write more efficient code while being simple enough for beginners, so let’s get started!

Using if-statements the program will determine whether the player or computer has won the round.

In the end, the player state will be set to false again. This will cause the program to start again to allow for continuous gameplay.

This project can be broken down into 5 main steps:

3.     Define the player and computer variables

4.     Create the game’s while loop and if statements

To start, we’ll need to import randint from the random module. This is a function that will allow us to make the computer variable randomly select either rock, paper, or scissors from the choice list. To do this, let’s type:

Next, let’s make the choice list. This is a list that will contain all the options that players can choose from (Rock, Paper, and Scissors). We’ll do this by typing:

As you can see, I’ve named our list ‘choice’ but you’re free to choose whatever name you want!

After we’ve made the choice list and imported the randint function, we can begin defining the player variables. To do this, we’ll be creating two variables:

We will need to set the player variable to false for now, as it will have no value until the player has made a choice. This means the computer will choose an option and will wait for the player to make a choice before continuing.

Hint: Remember that when counting, computers start at 0, not 1! This is why our randint command chooses from a range of 0-2 rather than 1-3.

In the end, your code should look like this:

Hint: If you want a way to check how your computer variable changes each time, try adding a line of code saying:

This will print the computer variable, which comes in useful when debugging!

Step 4: Create the game’s while loop and if statements

Now that we’ve defined our computer variable and set our player variable to false, it’s time to create our main game loop! To do this we’ll start by creating a simple while loop and asking the player for their input:

Note: now that the player variable has a value, it is no longer false. The program will then move on to the upcoming if statements.

Let’s get started with the first if statements:

Now that we’ve handled all the outcomes, we’ll create our final else statement. This will let the player know if they’ve chosen an invalid answer:

And we’re done with the if statements, we have only one step left!

Finally, we’ll set the player variable to false again and re-define the computer variable. To do this we’ll type the same command we did at the beginning, and it should look like this:

Hint: remember that the main loop is a while loop. Setting the player to false will reset the loop and let the player play over and over again.

And now we’re done! Feel free to test your code and see how it works. If you’re stuck or have any issues with your code, try reviewing it again. Or check out the code mentioned above as a reference. 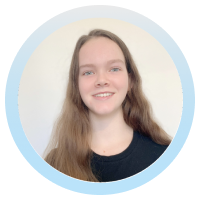 Kelsey is a Grade 10 student in Ontario, Canada. She completed Python, Java, and C++ at Geekedu. She is now focused on preparing for the USACO Silver Competition. She dreams of studying at MIT and is dedicated to turning that dream into reality step-by-step. Kelsey loves to write tutorials as a way to share her learning experience with Geekedu.

Sign up and get a 60-minute free assessment class